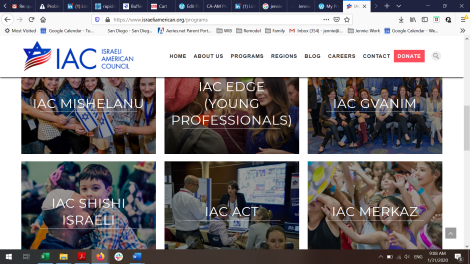 IAC – The Expansion of the Israeli American Council

Over the last 10 years there has been explosive growth of the Israeli-American Council activities with regional councils and activities opening across the United States. The Conference has grown to attract over 4000 a mix of Jewish-American and Israeli-American from across the country. Programs such as Keshet (pre school), Eitanim (teens), Mishelanu (college) Edge (Young … Continue reading →

Israeli Identity and the Future of American Jewry
Posted by Tarbuton & Startup18 ⋅ October 11, 2017 ⋅ Leave a comment

Though I’m not a fan of the term “Israeliness” because it feels trite; I do believe Israeli culture and Hebrew language can be a significant key to raising Jewish Americans with an Israeli lens that bridges and connects us for years to come. This article does a great job of arguing “Israeliness” may be a … Continue reading →

October 2015, citing statistics from the Reut Institute, the Israeli-American Council and the PEW report about Israeli-Americans, Jewish identity, education and Israel connection this article explores the important of Hebrew language for Israelis, Israeli-Americans and Americans too.  Written by Jennie Starr, Founder/CEO at Tarbuton Israeli Cultural Experiences in San Diego, CA. Read in English: @ … Continue reading →